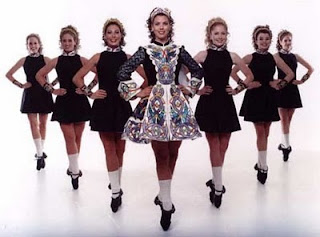 It was nice to see the Marcus Amphitheater lights turned on while I walked the Summerfest grounds. Irish Fest was this past weekend, and they are correct when they say that it's the largest Irish festival in the United States. The crowds rivaled that of Summerfest itself. There were times when you waited in line for food or drink tickets.
The rock stage was completely full, and fans were waiting for the Red Hot Chilli Pipers to play. They started late, but nobody minded. The weather was perfect, and the crowd was happy just to be outside in the non-muggy air.
Was there a sea of green along the Summerfest grounds? Not really. I would say that one in ten wore the green. I didn't. As the sun set, the lights from the stages took over. It was nice to have some solid beer options too. Some stands ran out of the better brews. I stayed away from the whiskey, as I was the designated driver.
Posted by Ms. Pacman at 7:29 AM