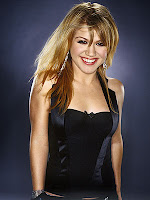 Kelly Clarkson will perform at Summerfest on June 29.  This concert announcement fills the second to last open date for the Marcus Amphitheater spots.  2012 Summerfest fans will once again have three country shows to choose from, a couple of classic rock shows, a DJ extravaganza, and some odds and ends.  Yes, I'm saying a Kelly Clarkson show is either an "odd" or an "end".

Clarkson is best known for winning the first season of American Idol.  Undoubtedly, she is also the highest profile winner of a show that culls the proverbial wheat from the chaff, talent wise.  Thousands of singers take a stab at the casting call, but there can be only one.  She was the first.  Since then, she has sold millions of disks and singles. Factoid: Her single titled A Moment Like This took a "rocket ride" to number one.  That song holds the record for the largest jump in the charts to number one, ever.

Kelly Clarkson cut her musical teeth in Northeast Texas, performing in her high school plays, where she was told that her vocal talents were a gift from above.  Singing lessons helped too. In short order, she was out of high school and looking at a pair of recording contracts.  She turned down both, stating that the contracts would have shackled her musically. You can only be a teen star during your teen years, and this girl wanted more.  She's 30 years old now, and has many multi-platinum hits to her name. The name of her 2012 tour is "Stronger." I'll bet that she's right.  Opening for Clarkson is The Fray.  The Fray has enjoyed success for a decade now.  They have come a long way from their church gigs.
Posted by Ms. Pacman at 12:07 PM