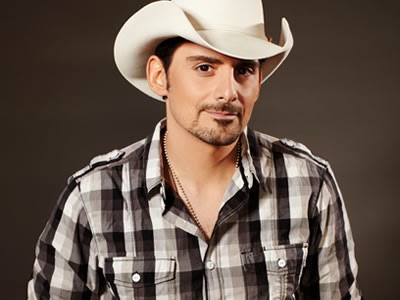 Country-rock superstar Brad Paisley will headline the Summerfest Marcus Amphitheater on June 27. Paisley is the sixth headliner announced for the event’s main stage so far, with Bruno Mars, Lady Gaga, the Dave Matthews Band, the Zac Brown Band, and Mötley Crüe already confirmed to perform. Classic rock legend Alice Cooper will feature as a special guest at Mötley Crüe’s show on July 4.
Paisley’s June 27th show will be opened by multi-genre music veteran Darius Rucker and fellow country signer Joel Crouse. Rucker is best-known as the founding member of rock band Hootie & the Blowfish, though, since 2001, he has received acclaim for a number of solo R&B and country albums. In December, Rucker became only the third African-American in history to win a Grammy Award in a country-music category, earning the nomination for his collaboration with the famed Lady Antebellum on his billboard topping single “Wagon Wheel”.
The 21-year-old Crouse has yet to release his debut full-length album, though his two singles, 2013’s “If You Want Some” and 2014’s “Why God Made Love Songs”, have both impressed on the charts. Crouse has toured with established acts Toby Keith and The Band Perry since 2011.
Paisley’s career in the genre has been in high-gear since his 1999 debut album “Who Needs Pictures” scored a pair of chart-topping singles and was certified platinum within a year of its release. He has released 9 more studio albums since then, garnering over 30 top-10 Billboard singles and 18 number ones. Paisley has won over 50 awards for his work in country-music, including best new vocalist in 2000, and, most recently, entertainer of the year at the 44th annual Country Music Awards.
Summerfest runs from June 25th to July 6th at Maier Festival Grounds on Lake Michigan. A one-day hiatus will take place on Monday, June 30th.
Posted by Ms. Pacman at 1:53 PM