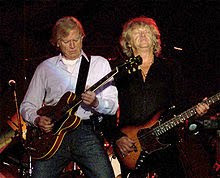 On June 30, the Moody Blues will be headlining one of the side stages. The Marcus Amphitheater headliner has yet to be announced, but for some fans, the Moody Blues will be more than enough. The band goes back 45 years. Summerfest Milwaukee is a great place for the Moody Blues show.
Their best, and most famous early hit song was Nights In White Satin. The year was 1968, and the trippy melody was perfect for the times. Tuesday Afternoon was also a mega-hit on that same album. Eventually, the band went their separate ways.
A reunion of the band was sure to follow, and in 1977, they got together to put out an album worthy of the time. Their label was hoping to slide a somewhat nasty old live show out into the marketplace, and the Moodie Blues were having none of that.
Posted by Ms. Pacman at 10:44 AM