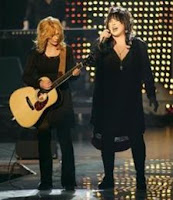 On July 5, 2011, Summerfest welcomes Def Leppard and Heart to the Marcus Amphitheater. Def Leppard was formed 33 years ago. They had a more metal edge to their sound at that time, but found success with bombastic rock hits such as Pour Some Sugar On Me, Hysteria, and Love Bites.
Heart, featuring the Wilson sisters go back a bit further. Songs like Baracuda, Dog and Butterfly, represent the scope of their abilities. If you happen to catch the Wilson current work, you will most certainly be impressed. They can still rock.

Def Leppard has sold over 60 million albums. In that time, nine different musicians have been part of the band. Four members have been a part of Def Leppard since 1982: Joe Elliot, Rick Savage, Rick Allen, and Phil Collen.

In the past ten years, Def Leppard has released four studio albums. The album titled "X" as in Ten was a diversion into the pop world, and tanked. Four years later, they released "Yeah!" with that album cracking the top 20 on the Billboard charts. Two years later, they put out Songs from the Sparkle Lounge, which received fair reviews across the board.
Posted by Ms. Pacman at 8:27 AM