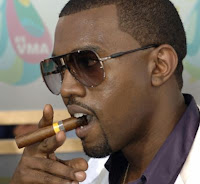 Kanye West and Kid Cudi will tear it up on the Marcus Amphitheater stage on June 30, 2011. West is certainly worthy of the headline slot, and Kid Cudi should get the crowed worked up before the roof blows off of the Marcus Amp.
Kanye West is promoting his latest disk titled Watch the Throne. Jay-Z and West collaborated on the project, and Def Jam Records is backing the disk. Kid Cudi comes out of Cleveland and got the attention of Kanye West when he released a mixtape in 2008. From there, he landed a spot on West's album 80's and Heartbreak. Cudi is on Motown, and is supporting his album Man on the Moon II.
Posted by Ms. Pacman at 12:22 PM