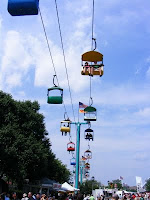 What did Summerfest do to deserve such great weather for 2011? It was amazing to see that just about every night was perfect for heading down to the festival grounds. Some nights were hotter than others, but nobody can complain about it being too bad.