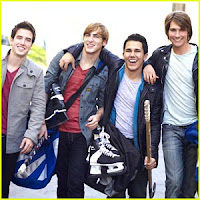 The Backstreet Boys and NSYNC stole the hearts of teenage girls everywhere in the 1990s with their boyish good looks and catchy love songs. While the “boy band” phase slowly faded away by the turn of the new century, a new male group known as Big Time Rush has captured the attention of a new generation of young fans. The pop quartet will be a headlining act at the Summerfest 2012 event at the Marcus Amphitheater in Milwaukee on July 6.

The group, comprised of Kendall Schmidt, James Maslow, Logan Henderson, and Carlos Pena, began receiving attention since their debut on a Nickelodeon-produced sitcom, named after the band, in late 2009. The premise of the show consists of four young hockey players from Minnesota that go to Hollywood to audition to be in a boy band. Their daily adventures and misadventures with producers, record labels, and each other, provide plenty of entertainment in the comedy/drama/musical sitcom.

The show’s premiere episode was the most watched live-action debut in Nickelodeon’s history. It was signed to a third season in 2011. Big Time Rush will see their first film, “Big Time Movie,” make its premiere on March 10 on Nickelodeon.

Their Gold-certified debut album, “BTR,” was released in October of 2010. It peaked at number one for Top Soundtracks, number three for Top Digital Albums, and number three on the Billboard 200. “BTR” is a mixture of musical styles, including R&B, dance, and rock.

“Elevate,” the group’s second album, was released in November of last year, and debuted at number 12 on the Billboard 200. It has sold over 200,000 copies according to Nielsen Soundscan as of the beginning of March. Their “Big Time Summer Tour” begins in Columbus, Ohio, the day before the Summerfest show, and will continue in 50 states across the United States and Canada, and concludes in September.

Summerfest, dubbed “The World’s Largest Music Festival,” is an 11 day event that will feature hundreds of musical acts, including Iron Maiden, Neil Diamond, Lady Antebellum, and the Beach Boys. It will begin on June 27, and finish up on July 8.
Posted by Ms. Pacman at 7:58 AM