Tiesto To Perform at Summerfest 2012 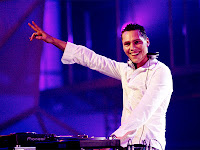 Is this the first Summerfest headline show to feature a DJ? Yes, it is. Tiesto will perform at the Marcus Amphitheater on July 3. Many other performers will join Tiesto: Steve Aoki, Pierce Fulton, Tommy Trash and Zedd. Tiesto is one of the most famous DJ's in the world. This show will certainly draw fans from far and wide.

Tiesto is not the youngest DJ currently riding high on the popularity of the genre. He's been performing on stages since the mid 80's and produced his first disk (titled Magik) in the 1990's. It's safe to say that his style of music is House and Electro House. One of his more notable performances included a stint at the 2004 Summer Olympics. By that time, Tiesto would be ranked as one of the most popular DJ's known to man. He would go on to have his own radio show, produce dozens of records, and do philanthropic work.
Posted by Ms. Pacman at 10:40 AM