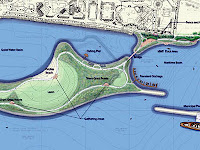 With the winds from Hurricane Sandy blowing across Lake Michigan, some folks headed down to the lakefront to check out the wave action.  Would Summerfest be safe from the 10-15 foot waves that were predicted to wash ashore?  An aerial view of the Milwaukee shore along the festival grounds shows that it's protected by a stone outcropping, breakwater, and back fill that was set in place years ago.  In fact, it's a great fishing spot that used to be frequented by anglers during the off season.

The waves came, but were not nearly as bad as predicted. The shores along Milwaukee suffered little damage, and the rocks along Summerfest showed little sign of the storm. Before you know it, we will be announcing the first Marcus Amphitheater 2013 headline act.
Posted by Ms. Pacman at 11:23 AM