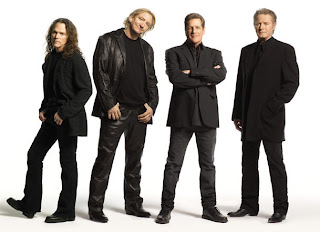 The final night of Summerfest 2013 will feature The Eagles at the Marcus Amphitheater. On July 7, Glen Frey, Don Henley, Joe Walsh and Tim Schmit will do their best to make thousands of fans happy. This one is sure to sell out fast, so get your Eagles Summerfest tickets now.

The band started way back in 1972.  Their early music was more of a country sound, with a soft rock feel. Those days have long since passed, and their current lineup is most heavily influenced by Glen and Don.  After all, that pair had certainly pushed their way to the top of the food chain. In order to keep a tight grip on the band, original members like Bernie Leadon, and Randy Meisner would struggle to stick with Henley and Frey.  Meisner found the road to be too lonely, and Leadon couldn't watch the band turn into your run of the mill rock act.   Leadon was credited for all that defined the early Eagles.  By 1975, the band was obviously going in another direction.

The Eagles stayed together for eight years, and in that time they recorded six albums.  Nearly every album spawned hit songs.  By the end of it all, the band had sold millions of records, but pretty much hated each other.  Would they ever get back together again?  Fourteen years later the world had their answer.  Yes, the Eagles would reunite.  Ticket prices for the Eagles show vary, depending on the section.  Don't forget, ticket prices include admission to the Summerfest grounds.  While you are there, feel free to walk the grounds and check out some of the more up to date musical acts.

In 1994 the band was inspired to reunite after helping make a video for Travis Tritt.  Sometimes the wounds just heal over, and everyone forgets why they were so sick of each other.  That was certainly the case for the Eagles.  They settled their differences and went on to charge the highest ticket prices for a modern rock band.  If they were going to get together, it was going to cost the fans big bucks to see them perform songs from twenty years back.  In fact, the disk that they made to support the tour cost a whopping $60 each.  That effort alone raked in over sixteen million dollars for those credited as writers.  Henley and Frey insisted on getting the highest share of the profits from their reunion and disk.  That prompted Don Felder to seek legal recourse.  That wasn't the first time that the dynamic duo would have to settle up with what most people feel are equal members of the band.

After 28 years, without a single note of new material, the Eagles released Long Road Out Of Eden.  It certainly seemed like a long road to their fans.  The band teamed up with the controversial retail chain Wal-Mart as their lone retail outlet with the rights to sell the disk.  That was of little matter to the general public, as the disk went multi-platinum.