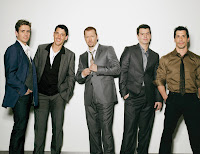 The New Kids On The Block are coming to Summerfest 2013. This "Boy Band" is made up of men who hit the big time back in 1990 with their hit song titled Step By Step.  They will "step" onto the Marcus stage on July 2.  They won't be the only "blast from the past" that night.  Backing them up are Boyz II Men, and 98 Degrees.  You can almost hear the screaming fans right now.  It will be an evening of memories, great singing, and possibly some old dance moves that had long since been forgotten.

What prompted NKOTB to reunite?  Some things just work out right, and that was the case for the band.  They worked behind closed doors six years ago, and came out with a new album, their first in a very long time.  Back in 1995, the band had called it quits, but there was no bad blood.  That left the door open for a reunion, the one that occurred in 2008. Since then, the band has pretty much stayed together.  Their new album is titled "10."