Food And Drink At Summerfest 2013 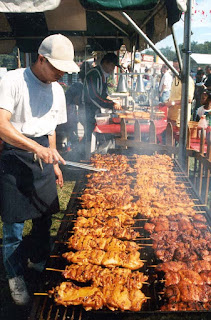 Visitors to Summerfest this year will have more than just music to look forward to. The annual music festival is introducing a plethora of new food vendors to the 2013 event, giving those hungry music lovers tons of options for their pallet.


Over 40 vendors will be on the fair-grounds this summer, serving up a variety of foods and beverages from all over the world. For 2013, there will be a few relative new-comers to Summerfest, most hailing from the Milwaukee area. The usual familiar faces at the event will also be on hand this year, most having added a number of new treats to their menus. Island Noodles, based in Florida, will be bringing their take on stir-fry to Summerfest in 2013. The acclaimed vendor will also be blending custom smoothies.


Local eats Zaffiro's Pizza and A.J. Bombers will have stands throughout the festival-grounds this year as well. Located on Farwell and Water, respectively, the pair will offer their famous pizza and burgers, Zaffiro's even offering one of the few salads to be had at the event. Zaffiro's made their inaugural debut two years ago, while A.J. Bombers has never served up their food at Summerfest.

Beer lovers will flock to the offerings Trinity brings to Summerfest for their third Big-Gig as a vendor. The downtown pub and grille specializes in traditional Irish cuisine, much of which will be available for purchase at the event. Shepard's pie and the best corned beef in the city are the highlights of the extensive menu, though open-minded individuals are urged to try Trinity's well-regarded Irish nachos.
Sweet-teeth will be happy to hear that Summerfest management had their taste-buds in mind this off-season, securing an appearance by world-renowned baking-artist Classy Girl Cupcakes. Owner Erica Elia will be on-hand to offer passers-by a chance to taste nine of her one-of-a-kind cupcake recipes, one of which includes beer as an ingredient.